Australian Voice has reprinted this poem with permission.
. 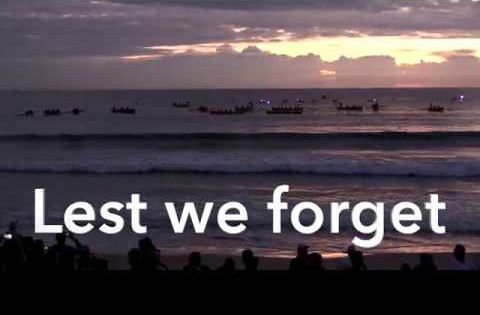 .
ON THIS HALLOWED DAY
.
Here we gather on this hallowed day
To pay our respects on ANZAC Day
Aussies and Kiwi’s we gather as one
And remember the fallen at the rising sun
.
Of those who paid the ultimate price
With stories of bravery and sacrifice
Of wars fought long ago we still wonder why
So many brave people needed to die
.
Today’s not about politics, anger, or debate
But reflection, two up and beers with your mates
To some we remind, it’s not a day off
It’s to commiserate and remember, your freedom had costs
.
Our nation’s identity was born on a beach overseas
At a small piece of land, they called Gallipoli
And tragedy happened and some say we lost
But our lads did their job, no matter the cost
.
Stories of those who lied and joined at fifteen
Chasing adventure and a boyhood dream
With no idea why, they wanted to settle the score
The enemies name irrelevant, there will always be more
.
The little girl wears the medals her grandad earned
And watches the soldiers who’ve recently returned
Too young to understand or ever ask why
Waves her flag and cheers as they proudly march by
.
The passage of time slowly welcomed the rest of the diggers
The great wars are no more but their memories linger
Korea, Vietnam and the ongoing Middle East
Will we ever find a way to just live in peace?
.
So we say our prayers and look to the skies
But for the grace of god, it could be you or I
And Lest we Forget those who currently serve
We give our thanks and respect, it’s what they deserve.
.
.
Stewart Elliott
20 April 2021
.
.
Stewart Elliott lives on the Sunshine Coast in Queensland. While he holds the copyright he has made it freely available for publication provided he is given acknowledgment as the author.
Tags: all, archive, culture
Subscribe