This is a reprint of an important message from Dr Michael Yeadon sent to Robin Monotti Graziadei.(1) The location of the article discussed by Dr Yeadon is given in the footnotes.(2)
.

Dear Robin,
My message is a plea not to be fooled by the Great Lie of 2021, that “variants escape our immune defences so we’ll need repeated vaccination”.
I am deeply concerned about this lie & what it may portend.
Would you please share this as widely as you can?
Many thanks,
Mike
. 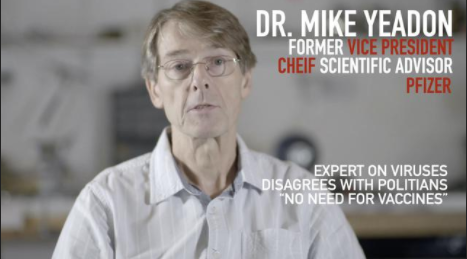 Dear humanity,
﻿I just read this ‘study’ claiming that, in vaccinated individuals, a variant of concern (VoC) appeared more frequently than in non-vaccinated individuals.
.
They’re implying that such VoC ‘escape our immunity’, attacking us as if we had no immunity.
It’s complete nonsense.
.
They tested ‘carriers’ (note choice of the word, which you’d never use, because the clear implication is of an ability to infect others with this VoC, something for which there’s absolutely no evidence) & these people are clinically well, with no symptoms.
.
They did find the VoC more often than in a claimed matching group of unvaccinated individuals.
So what? There are numerous possible reasons for this, the most likely being that they’re not measuring what they think they are.
.
Crucially, the VoC differs so little from the original virus that it’s impossible that, despite being immune after vaccination, it somehow “escapes their immune system”.
.
The referenced work, showing that certain circulating antibodies are less effective in blocking the interaction involving a VoC (a synthesised portion of the virus & an artificial binding receptor for spike protein) is an example of very poor science.
.
The whole set up plays to the idea that it is mostly or wholly just the antibodies that confer & are responsible for the functional immunity acquired after vaccination (or natural infection). Yet there’s no evidence for this at all.
.
Indeed, it’s intrinsically unlikely. Antibodies are very large molecules which are mostly considered to be outside cells, either in blood or in the spaces between cells outside of the blood supply or, in some specialised circumstances, secreted onto outward-facing body surfaces (as described by Sucharit earlier in this thread).
.
Plausibly, such antibodies could play an important role in preventing reinfection, during the period while the invading virus pathogen is in those compartments described, outside cells.
.
But no serious immunologist would fail to recognise that, during clinically relevant illness caused by this virus, most of the battle between virus-infected tissues & our immune systems takes place when the virus is INSIDE OUR CELLS.
.
The virus must be inside our cells in order to take over the replication apparatus of the cell, that being the only way in which the virus can multiply. Our cells are forced to make multiple copies of the virus, before that cell dies, liberating many more virus particles.
.
During this process, repeated again & again, it’s not possible that antibodies, mostly restricted to the outside of cells, has any important function in host defence.
.
That role is mostly performed by CD8+ cytotoxic T-lymphocytes (aka “T-cells” or “T-memory cells”). An infected cell has no choice but to signal that it’s occupied & it does so by placing on its external surface fragments of the invading virus.
.
These signals are detected in a highly-specific way by T-memory cells, which then attack the infected cells & kill them, along with viruses inside.
.
They do not attack healthy cells.
.
Now, the breadth & detail of recognition of the virus and EVERY VARIANT of the virus is so great that it’s literally impossible for infected cells not to be detected as infected. This is because the changes to the virus are minuscule & so at most, only a few of the flags placed on the outside of infected cells are different from those our immune systems have seen before.

Conversely almost all the infection-signalling flags are identical to those we’ve seen before & our cellular immunity (T-cells) easily & speedily mop up infected tissues so readily that clinical infection is prevented.
.
This isn’t a theory or speculation.

.
.
DR YEADON HAS MORE TO SAY ABOUT COVID "VARIANTS:
.
About 36 minutes into an interview with James Delingpole Dr Yeadon explains in more detail why Covid-19 variants are not any more dangerous that the oiginal Covid-19 virus.(3) This is my transcription - simplified somewhat - of the interview between 36:03 and 38:08.
.
"You will probably all have heard...the story of virus variants. (...) The first time I heard this I thought oh that's interesting. (...) So I went to molecular biology and went to have a look and there was one amino acid change. I thought, that's quite unlikely to alter its behaviour. Let me explain why. This (the Covid-19 virus) is the largest, or one of the largest, virus ever sequenced. It contains 10,000 amino acids. Those are the building blocks of a protein. What that means is that if you changed 100 of them that would be a 1% change. But I've looked and the most different variant, the one that's furthest away from the virus first sequenced in Wuhan, China is 27 amino acids, less than .3% different. In other words it is 99.7% identical to the original. I assure you that the human immune system is much cleverer than that. It's impossible for a variant that differs by .3% that that will evade immunity. So the stuff you hear about, advisors saying we're not quite sure if the vaccine will work as well against this one or against that one...  It's bullshit."