INTRODUCTION
Early in January 2021 a Florida doctor, Dr. Gregory Michael, died of Idiopathic Thrombocytopenic Purpura, a rare autoimmune disorder that causes low platelet levels. Many of us believe the Thrombocytopenic Purpura was in turn caused by a reaction to an injection of the Pfizer vaccine on December 18, 2020. Pfizer replied "we don't believe at this time that there is any direct connection to the vaccine.”(1) They also insisted there is no indication that the vaccine could be connected to thrombocytopenia. Notice “an idiopathic disease is any disease with an unknown cause or mechanism of apparent spontaneous origin.”(2) If we are right, Dr. Micheal did not die of anything “ideopathic” at all.
.
With the help of information from the doctors4covidethics and Wikipedia, I will explain the connection between the Pfizer mNRA vaccine and Dr. Michael’s death from Idiopathic Thrombocytopenic Purpura.(3) I claim no originality for this account. My goal is only to show how others understand what Pfizer does not want to understand, the way that their medication can kill healthy people. The passages from Wikipedia are used to unpack some of the central concepts of microbiology which may be unfamiliar to most of us who do not have an extensive scientific training.
.
.
HOW AN mRNA VACCINE WORKS
We must begin with a description of how an mRNA vaccine works. This account is taken from a website of the Center for Disease Control, the CDC.
.
"COVID-19 mRNA vaccines give instructions for our cells to make a harmless piece of what is called the “spike protein.” The spike protein is found on the surface of the virus that causes COVID-19.
COVID-19 mRNA vaccines are given in the upper arm muscle. Once the instructions (mRNA) are inside the immune cells, the cells use them to make the protein piece. After the protein piece is made, the cell breaks down the instructions and gets rid of them.
"Next, the cell displays the protein piece on its surface. Our immune systems recognize that the protein doesn’t belong there and begin building an immune response and making antibodies, like what happens in natural infection against COVID-19.
"At the end of the process, our bodies have learned how to protect against future infection. The benefit of mRNA vaccines, like all vaccines, is those vaccinated gain this protection without ever having to risk the serious consequences of getting sick with COVID-19."(4)
.
IMAGE FROM WIKIPEDIA(5) 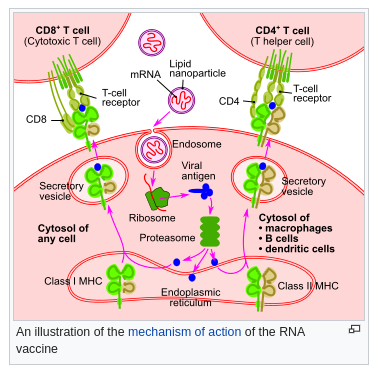 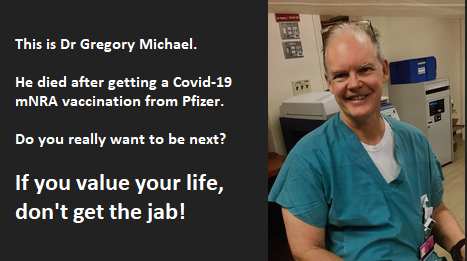 .
At this point we need to look at the death of a Florida doctor Gregory Michael MD. This is part of the report by his wife, Heidi Neckelmann:
.
"He was vaccinated with the Pfizer vaccine at MSMC on December 18, 3 days later he saw a strong set of petechiae (dots on your skin which are a sign of blood leaking from capillaries under your skin) on his feet and hands which made him seek attention at the emergency room at MSMC. The CBC that was done at his arrival showed his platelet count to be 0 (A normal platelet count ranges from 150,000 to 450,000 platelets per micro liter of blood.) He was admitted in the ICU with a diagnosis of acute ITP (Idiopathic Thrombocytopenic Purpura, a rare autoimmune disorder that causes low platelet levels) caused by a reaction to the COVID vaccine."(23)
.
Dr Michael first experienced blood leaking from capillaries under his skin. This was described by the doctors4covidethics as “endothelial damage with subsequent triggering of blood coagulation via platelet activation will ensue at countless sites.” Next it was found that he had a zero platelet count. This was fully expected by the doctors4covidethics: “It must be expected that this will lead to a drop in platelet counts,” just what results from Thrombocytopenia.
.
I don’t believe Pfizer, governments, the media or even most people who discuss these new vaccines recognize that now there is a plausible explanation for the death of Dr. Michael supplied by the doctors4covidethics, the burden of proof now lies with Pfizer to prove that this causal explanation is incorrect. What have we missed?