The "Great Reset" promoted by Klaus Schwab and the World Economic Forum has attracted a lot of interest. However it is not a "reset" because Schwab makes clear it does not mean going back to the same old thing. It is a plan for a REVOLUTIONARY CHANGE in every aspect of human society. Furthermore, I think it is a decoy, a diversion to take attention away from THE REAL RESET, A WORLD DEBT RESET. This reset is a genuine reset, in which your financial position goes back to its original state: no debt, no property and no assets.

The REAL ANSWER can be found in the report by a whistle-blower in Canada using information from Liberal Party of Canada's Strategic Planning Committee, under the control of Canada’s Office of the Prime Minister. The words that caught my eye were "debt reset". Why? Because EVERYBODY KNOWS there is a REAL PROBLEM with the world financial system: THE DEBT BUBBLE.

The whistle-blower explained that an international economic collapse was on the cards. When this happens, the Canadian federal government would offer to eliminate all personal debts, mortgages, loans, credit cards, etc., to be funded by the IMF under “the World Debt Reset program”. This would achieve several goals for the super-rich investors and their banks:

- The debt bubble would disappear, so they could start creating more debt for other things.
- Ordinary people would be VULNERABLE and broke, without cash, deposits or assets.
- Because people would be HELPLESS, they could be made to do whatever they were ordered to.
- In particular, they would be FORCED TO ACCEPT ANY AND ALL VACCINATIONS, even though they are probably intended to reduce the global population = eugenics, extermination or genocide.
- Those who do not accept being vaccinated will be locked up as biological hazards under the new system of medical martial law. Clearly they could expect no mercy from the people carrying out this plan.

Since the Climate Change and Covid19 planning is WORLD-WIDE, we can safely assume that this is planned for at least the 5 Eyes countries, USA, UK, Australia, Canada and New Zealand. We can also assume that however evil and draconian the plan is, the political leaders and the political elite of these countries will work to carry out the plan.


This is the video from Canada about the Debt Reset plan.

You should listen to the video (18 min) and read the comments. This is the real endgame of the super-rich because it solves the problem with the finance system everyone knows about: the debt bubble.

1) I think the report from Canada is about a real document, but my ego is not tied up with it. If it turns out to be mistaken - not part of their real plans - I will be happy to admit I was wrong.

2) To me the most revealing feature of the plan is the COMPLETE RUTHLESSNESS TOWARDS CITIZENS. The attitudes contained in the document are the attitudes of A CONQUEROR. This is not "normal" government business. For example Pinochet's coup went after the "left" and did not set out to kill off the rest of the population or rob them of their property. The same is true of the NAZIs in Germany. There are MANY events in history and the present where conquerors/invaders have acted like this. Here are just a few:

This behaviour has been exhibited in countless colonial invasions BUT IT HAS NEVER BEEN ROLLED OUT AGAINST THE CITIZENS OF MAJOR COUNTRIES IN THE WEST. It is totally beyond the experience of people in the West. They simply cannot imagine that "their" government would rob, restrict and kill them in such a ruthless way.

3) Needless to say the media has played a central role in making people think that what has been done so far is justified and nothing to worry about. And governments have made sure that nobody - UNTIL THIS LEAK - revealed the real NATURE of their plans and THE REASON. We have been given reasons for change like "climate change" and "covid19 pandemic", world wide problems which threaten all life on Earth. We have even been given Klaus Schwab's "Great Reset" - which IS NOT REALLY A RESET ANYWAY. He uses BOTH of these as reasons for IMMEDIATE ACTION. But Schwab's "Reset" reads MORE LIKE A SCIENCE FICTION NOVEL. Is THIS the real reason?

4) Clearly the banks and the super-rich WANT TO CHANGE THINGS, but I didn't really understand why until I saw the Canadian report. THEY WANT TO WIPE OUT THE GIANT DEBT BUBBLE THEY HAVE CREATED IN THE LAST 50 YEARS AND START OVER AGAIN WITH A CLEAN SLATE. This is a REAL RESET, back to the original state. By crashing the financial/economic system they can:

a) take control all property, assets they don't already own,
b) force people to live on what they call a basic income = subsistence,
c) use vaccines to monitor and control everyone with bio-security, medical martial law & damage their health,
d) remove dissenters from the public for incarceration and/or death.

Under these conditions - particularly with no cash & digital money - people will be totally under their control.

Because the owners/rulers in this system have no obligation to protect the lives of people - no right to life, etc.- people will be reduced to THE CONDITION OF SLAVES IN GREEK AND ROMAN SOCIETY. Slaves were considered property and had no more right to life than a cow or sheep does today. They could be killed by their owner any time they wished to.

5) The only thing which might stop people believing this story is that they cannot imagine being treated this way by "their own" government. We must remember that people like Tony Blair and Barak Obama engaged in RUTHLESS WARS ON OTHER COUNTRIES. They and the rest of the super-rich & ruling class are capable of killing foreigners who get in their way. What is going to stop them from doing the same to people in the West WHEN IT IS IN THEIR INTEREST TO DO SO?

In fact, I would argue that THEY MUST DO A RESET OF THE FINANCIAL SYSTEM, and they have known this for years. They know their system as it exists now IS FINISHED! Rather than allowing it to slowly slip into decay and be taken over by revolutionary forces as in Russia and China, they have decided to finish it of themselves in a way which they hope will give them even greater power and wealth than they enjoy today. IT REALLY IS US AGAINST THEM. We must be crushed for them to continue ruling the world in a way which increases their profits, OR WE MUST STOP THEM AND RESTART THE FINANCIAL SYSTEM/ECONOMY IN A WAY WHICH BENEFITS MOST OF THE PEOPLE RATHER THAN THE SUPER-RICH AND THEIR FRIENDS. 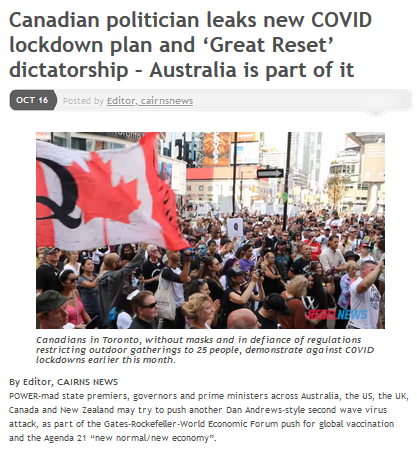 A Useful Discussion of the Canadian Leak:

A passage from this article which quotes the original document and explains the plan in more detail:

The road map and aim was set out by the Prime Ministers Office and is as follows (note similarities to Victoria):

– Phase in secondary lock down restrictions on a rolling basis, starting with major metropolitan areas first and expanding outward. Expected by November 2020.

– Rush the acquisition of (or construction of) isolation facilities across every province and territory. Expected by December 2020.– Daily new cases of COVID-19 will surge beyond capacity of testing, including increases in COVID related deaths following the same growth curves. Expected by end of November 2020.– Complete and total secondary lock down (much stricter than the first and second rolling phase restrictions). Expected by end of December 2020 – early January 2021.– Reform and expansion of the unemployment program to be transitioned into the universal basic income program. Expected by Q1 2021.– Projected COVID-19 mutation and/or co-infection with secondary virus (referred to as COVID-21) leading to a third wave with much higher mortality rate and higher rate of infection. Expected by February 2021.– Daily new cases of COVID-21 hospitalizations and COVID-19 and COVID-21 related deaths will exceed medical care facilities capacity. Expected Q1–Q2 2021.– Enhanced lock down restrictions (referred to as Third Lock Down) will be implemented. Full travel restrictions will be imposed (including inter-province and inter-city). Expected Q2 2021.– Transitioning of individuals into the universal basic income program. Expected mid Q2 2021.– Projected supply chain break downs, inventory shortages, large economic instability. Expected late Q2 2021.

– Deployment of military personnel into major metropolitan areas as well as all major roadways to establish travel checkpoints. Restrict travel and movement. Provide logistical support to the area. Expected by Q3 2021.
Collapse