At the moment China is the fifth largest investor in Australia. It has also recently become the second largest foreign owner of Australian land. It has only 2 million hectares less than the UK. Much of the investment is not by China's State Owned Enterprises (SOEs). These are gradually being turned into privately owned companies as required by the Communist Party of China. While most investors are private individuals or privately owned companies, the investments are guided by government policies, such as the One Belt, One Road Initiative (OBOR). Investments clearly tied to the OBOR policy are the acquisition of the Ports of Newcastle, Melbourne and Darwin. Newcastle is the largest coal port in the world, Melbourne is Australia's largest port, and Darwin is important for animal exports. Other areas of Chinese investment include mining, real estate, infrastructure, and electricity.

It is important to realise that Chinese investors often invest jointly with foreign investors or Australians. In other words, they invest in Australia in the same way as any other foreign capitalist investors. They put money into Australia in order to take money out or use their profits to expand into other areas. Chinese investment is not a socialist swan but a capitalist duck. The discussion of Australia's wine exports to China shows that like most other countries, China's trading relations are connected to broader political concerns.

The following chart shows the pattern of foreign investment in Australia between 2015 and 2017, recorded in A$billion. 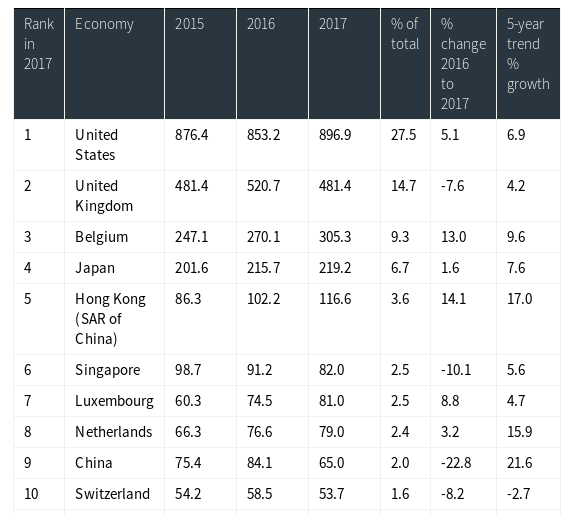 For some reason the information from the Australian Department of Foreign Affairs and Trade separates the investment from Honk Kong and the People's Republic of China even though they have been united for years. Adding the two together, the total Chinese investment in Australia is A$181.6 billion, which makes it the fifth largest investor in this country. Between 2012 and 2017 the most rapid increases in investment are 21.6% for China and 17% for Hong Kong. Even though the increase for China is the highest over this three year period, investment fell considerably from 2016 to 2017. According to a recent report by KPMG:

Chinese government regulations which were implemented to address concerns about speculative, irrational global investments and massive capital outflows have impacted the Australia result, as have recent changes to Australia’s foreign investment regulations for strategic infrastructure assets.

Australia remains globally competitive for attracting Chinese investment, retaining its position as the second largest recipient of accumulated Chinese investment – only behind the United States – with just under USD 100 billion since 2008.

Chinese investors continue to be drawn to projects in Australia that relate to growing Chinese consumer demand and Chinese government priority initiatives – health and wellbeing, tourism and lifestyle, real estate, technology, services and a continuing demand for mining commodity resources.

Private investors accounted for 83 percent of the Chinese deal volume and 60 percent of deal value in 2017, up from 78 percent in number and 49 percent in volume in 2016. Chinese SOE investment dropped in both the number and value of investments for the first time since 2014.

The breakdown of Chinese investment varies from year to year depending the projects they are interested in. It will be more useful to look at the important areas individually.

Mining:
The mining sector saw 12 deals announced in 2017 totalling AUD 4.6 billion, a rise of 448 percent from 2016. This large increase was mostly driven by the AUD 3.4 billion acquisition of Rio Tinto’s thermal coal assets by Yancoal.

Agricultural land:
Chinese investment in land is very important. In 2017 UK owned the largest amount of land with 16.4 million hectares, followed by China with 14.4 million hectares. By contrast US ownership has fallen to 2.6 million hectares. The rise was largely due to the Australian Outback Beef joint venture between mining magnate Gina Rinehart and Chinese partner Shanghai Cred buying the 10 million hectare S Kidman & Co cattle empire.(2)

Ports:
Ports are a vital component of Australian trade infrastructure, underpinning 20 percent of Australian GDP.
In 2014 the world's biggest coal port, the Port of Newcastle, was sold in a deal worth A$1.75 billion. A consortium made up of Hastings Funds Management and China Merchants made the successful bid for the New South Wales Government asset.(3)
A consortium of global and domestic funds, backed by investors including China Investment Corp, agreed to buy Melbourne, Australia’s busiest port, for A$9.7 billion.(4)
In 2015 the Chinese Landbridge corporation bought a 99 year lease for the Port of Darwin for A$506 million.(5) The Chairman of Landbridge Ye Cheng sees this as part of China's One Belt , One Road initiative.(6) He also bought the Brisbane-based gas producer WestSide Corporation in 2014.(7) Landbridge also paid US$900 million for a port in Panama which fits in the One Belt, One Road plan.(8)

Australian Wine Exports:
While the focus of this article is on Chinese investment in Australia, this year an interesting conflict has appeared in one area of Australian exports to China, namely wine. In the last few years wine exports to China have rapidly increased to $A1 billion annually. However earlier this year Prime Minister Turnbull complained about Chinese political interference in Australia and took steps to develop tougher laws aimed at cracking down on foreign interference in Australian politics. After this announcement it seems Australian wine now take two months to clear customs in China while wine from other countries only took two weeks. Major exporters such as Treasury Wine Estates and McWilliams Wines as well as Wolf Blass, Penfolds and Rosemont have reported such delays. Global Times, among a few Chinese newspapers, is calling for China to slash Australian imports to teach Australia a lesson.(10)


This article is one part of four articles on Chinese "Socialism"

China's State Controlled Capitalism is Not Very Different From Capitalism in the West
https://australianvoice.livejournal.com/39306.html

The Damage Caused by China's “Socialism” to Workers Around the World
https://australianvoice.livejournal.com/39545.html

1. Much of the information on Chinese investment in Australia comes from the three sources given below. Where there is another source of information it is given in the other footnotes.
https://dfat.gov.au/trade/resources/investment-statistics/Pages/statistics-on-who-invests-in-australia.aspx;
https://home.kpmg.com/au/en/home/media/press-releases/2018/06/chinese-investment-in-australia-remains-strong-despite-global-outflow-slowdown-12-june-2018.html; and
https://assets.kpmg.com/content/dam/kpmg/au/pdf/2017/demystifying-chinese-investment-in-australia-may-2017.pdf