Just this year we have seen three striking new developments around the world. Each on its own is of great importance, but together they constitute a geo-political event which marks the end of the world political system set down at the end of WWII.

A NEW KOREA
Several years after WWII ended in the Asia-Pacific region a war began on the Korean Peninsula. I have little doubt that it was started by the US. The US invasion of Democratic People's Republic of Korea was perhaps even more savage than the Vietnam war. Since the US could not occupy and control DPRK, they simply destroyed it. Now after decades of US organised hostility, the two Korea's acted independently of the US to begin a process of unification. And they have powerful friends in Russia and China who for their own reasons want a united Korea to integrate with their long term economic planning.


US HAS LOST THE SYRIAN WAR
Unlike the inconclusive invasions of Iraq and Afghanistan, the efforts by many thousands of mercenaries supported by almost everybody in the Middle East and the EU to remove the democratically elected government of Syria has failed. The US may have had several reasons to start this proxy war, but the single most significant problem they faced was that Assad had agreed to support a pipeline between Iran and EU. This meant that the Assad government refused to sign a proposed agreement with Qatar that would have run a Gas Pipeline from its North gas field through Saudi Arabia, Jordan, Syria and on to Turkey, with a view to supply European markets. The clear intention of this pipeline was to transport gas to the EU as competition with and/or replacement for gas from Russia and Iran.

Although this is probably a less spectacular loss for the US than the Vietnam war, it means that both Russia and Iran are poised to increase their role supplying energy to the EU and Israel's dream of removing both Syria and Iran as competitors in the Middle East is dead. And as we shall see shortly, this is not all the victory in Syria will make possible in the future.


GERMANY HAS DECISIVELY BROKEN WITH THE US AND WILL EMBRACE RUSSIA
Perhaps even more surprising than the sudden suggestion of a unified Korea is the equally sudden shift of Germany and the EU to honour the Treaty negotiated with Iran and reject US moves to sabotage the treaty and cut all economic ties with Iran. If this development continues, it will re-draw the political map of Europe in a way which limits US influence to levels not seen since 1914.

When Angela Merkel arrived in Russia for negotiations with Vladimir Putin in May, the European Union activated the legislation that blocks American sanctions against Iran. Furthermore the national governments of EU countries have the opportunity to compensate for the damage incurred by their companies should they suffer because of the direct effect of the American sanctions.

“This means that the European Union, which teetered on the brink of an economic war with the US, didn’t simply opt for a confrontation, but added a political standoff to the economic conflict. For the US the refusal of Europe to join the anti-Iran sanctions is, first of all, a political slap in the face – the refusal to recognise the right of Washington to individually determine the policies of the West. But if the US isn’t recognised by the EU as indisputable authority any more, then it means that the US isn’t the world hegemon any more.”(1)

Certainly the US will not let this decision stand without a fight. Apart from financial pressure, the US could stir up a conflict with Russia in the Ukraine which might force Germany to reconsider its decision. Also the US has a much more dangerous card to play in the EU and in Germany in particular. It is quite possible that the US has connections with some neo-Nazi groups in the EU. It is also likely that they have connections with some of the demobilised fighters from Syria and elsewhere in the Middle East who have moved to Europe as asylum-seekers or migrants.

The recent migration to the EU has created a massive social crisis which the EU elites have been sitting on for years. If the US decides to ignite these simmering tensions the characteristic “sectarian” conflicts we have seen in many other places like Iraq, Syria, Libya, Egypt, Myanmar will pose a unique challenge to the leaders of the EU.

We must remember the standard US policy in these situations: If they cannot control or politically direct the EU then they will work to destroy it, so it becomes a liability for Russia and China, not an asset. 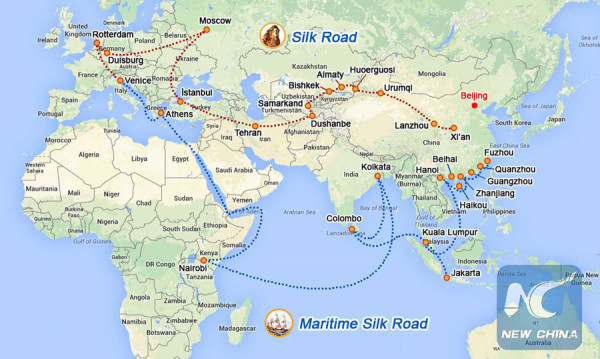 AND THERE IS MORE
So far I have discussed these as three separate events, but not to far in the background is the well known Chinese New Silk Road, or Belt and Road Initiative (BRI), an essential plank in their Eurasia integration project. This is a colossal economic project of railroads, roads, pipelines, ports which will span the Eurasian continent from the Xi'an to Rotterdam. Notice Iran is central to this project as well as Germany, Russia, Poland, Greece and Turkey.

There is little doubt that the Chinese Belt and Road Initiative will provide an economic boost for all who take part. Russia and Germany are natural partners and the dead-in-the-water economies of the EU should grasp this opportunity with both hands. And what can the US offer as an alternative? More expensive energy and the dead hand of US/UK banks.

Who knows how all this will turn out? Geo-politics is not a fairy-story where all can live happily for ever after. The point is, however, that if the solid economic progress offered by China and Russia is going to materialise, the US Empire will need to be kept at bay. This is what the fighting will be all about.


WHAT ABOUT AUSTRALIA?
Notice also that there is no place in the BRI for the Anglo-Zionist countries: USA, UK, Canada, Australia, and New Zealand. In our area, the US reply to the BRI is the Indo-Pacific strategy deployed by the Quad – US, India, Japan, Australia. This is a barely disguised containment of the China follow-up mechanism to the Obama administration’s pivot to Asia. Notice that even India is not a whole-hearted supporter of US policies in the region. Like Germany, the US does not have much to offer India compared with the Chinese BRI.

Will all of this decided by military force alone? This is all the US has, and thanks to its rejection of the Iran treaty, they have just turned some of their supposed best friends into enemies in a matter off weeks. But the risks of force are also high.