“Nevertheless, we do not lose our hope that the voice of reason will sooner or later prevail, and that our American colleagues will be aware of the futility and detrimental nature of further sliding down the spiral of sanctions.
“In the meantime, we are beginning to work out the inevitable response to this situation.”

INTRODUCTION
Trump’s new commitment to continue the war in Afghanistan comes as a shock, after all the Americans had voted to stop Washington’s wars around the world.  As a punishment, they are being treated to an artificially created civil conflict, while the deep state continues to use the US infrastructure, financial and human capital and military to pursue its doctrine of perpetual war.

Reading from the teleprompter, Trump not only unveiled plans for open-end war, he also promised to stop revealing any future US plans. It makes sense to look at the plans they have revealed so far to see what to expect. After all, we all have witnessed working of the plan revealed by the general Wesley Clark in 2007 to take out seven countries in five years.

US ARMY PLANS FOR THE FUTURE
In August 2012, TRISA-Threats published “Operational Environments to 2028: The Strategic Environment for Unified Land Operations”. In this publication, TRADOC G-2 identified potentially contentious OEs and missions the US Army could face, including the OEs of Iran, China, Yemen, North Korea, Pakistan, and Nigeria as possible environments.” For those who don’t know this yet, “Operational Environments” are countries that the US bombs and invades. 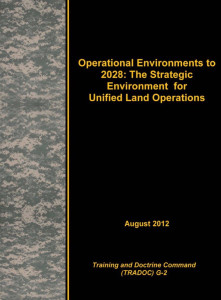 THE TRADOC mentioned here is the U.S. Army Training and Doctrine Command. TRISA is Tradoc Intelligence Support Activity. Keep in mind, this 20-year plan written in 2012 prior to the mass migration from Africa and the Middle East to Europe, but it speaks of the European economic and societal collapse by the year of 2028. This plan also speaks of Ukraine becoming a NATO member, even so it was written prior to the Maidan color revolution and the war in Ukraine. Also, this plan was written prior to the North Korea obtaining the Soviet ICBM technologies from Ukraine, but it names North Korea as “Operational Environment,” or, in plain English, a war zone.

Reading this remarkable document should enlighten you on predetermined nature of the US wars, engagements, lead from behind actions, and all the activities in support for “human rights.” For the Europeans to blame Muslims in an ongoing migrant crisis is like blaming cattle for running over their fields, and ignoring cowboys driving and steering their herd from behind.

NEW PLANS FOR INDIA - KEY US ALLY
According to this plan, the most crucial event of 2016 wasn’t Hilary Clinton losing the elections and Donald Trump winning. The most important event was the Indian government signing the logistics support and communication interoperability agreements that the U.S. has lobbied intensively for since 2005,  but the Indian government had been refusing to sign because it will nullify India’s independent security stance, interfere with India’s easy access to Iranian energy supplies, jeopardize Indian partner status in the Silk Road projects among other things. 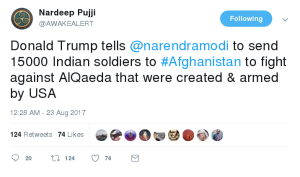 Newly elected Indian government threw caution to the wind, and signed the LEMOA agreement in April 2016. LEMOA stands for Logistics Exchange Memorandum of Agreement (LEMOA), an India-specific version of the Logistics Support Agreement (LSA). The three agreements — Logistics Support Agreement (LSA), Communications Interoperability and Security Memorandum of Agreement (CISMOA) and Basic Exchange and Cooperation Agreement for Geo-spatial Cooperation (BECA) are referred to as the foundational agreements which the U.S. signs with countries with which it has close military ties.

The agreement permits American aircraft and warships to access Indian military bases for refuelling, repair and other logistical purposes. This agreement gives the US military a legal foothold in Eurasia. Something they have never had before.

UNIQUE INSIGHT INTO INDIA TODAY
The following documents were posted on Twitter by Scott's Humor: 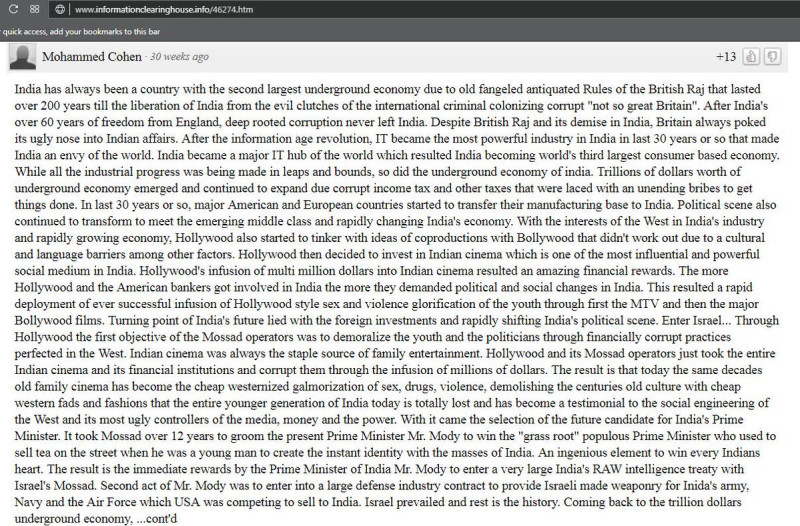 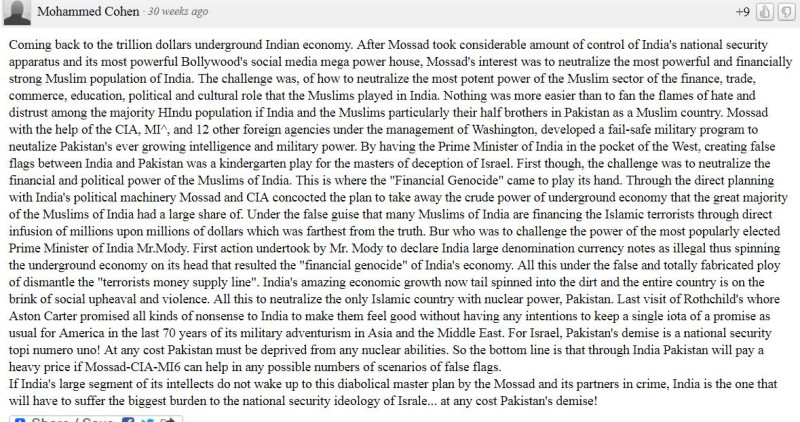 SUMMARY OF IMPORTANT US ACTIVITY AND PLANS

1. Uncontrolled growth of the US personnel and equipment in Afghanistan 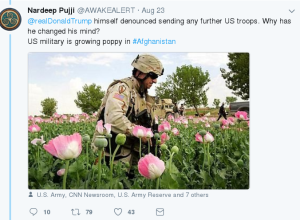 2. Naming Pakistan a threat to the US.

3. Skirmishes between India and Pakistan, in which the US takes India’s side. This hostilities were most likely initiated by the US SOF dressed as corresponding militaries.

4. Skirmishes between India and China, in which the US takes India’s side. Most likely initiated by the US SOF.

5. Transfer to Korea ICBM technologies from Ukraine by the SBU under a full control of the C.I.A.

6. The attempts to initiate a war on North Korea. So far, the US attempts failed because Russian fleet positioned itself between the N. Korean coast and the US 7th Fleet, and the Russian battleships were ready to intercept anything flying from the US ships towards N. Korea.
However, this Russia’s strategy won’t work if war is initiated by the South Korea, or by the US special forces dressed as South Koreans or Chinese troops.

8. The US has lost the war on Syria, but they plan to transfer their surviving proxy troops into Afghanistan, Yemen, Pakistan and India.

11. Blaming Russia for supplying North Korea with ICBM technologies, which has been written into plan in 2012. North Korean spies were arrested in Ukraine in 2011 for trying to obtain these technologies. The arrests and convictions were made by the Ukrainian security services when Yanukovich still was a president. After the Maidan putsch, SBU raided the RD-250 rocket engines manufacturer and seized all its technological documents.

12.”Operational Environments to 2028″ names Azerbaijan as one of the future war zones.

13. As a pretext for war, Pentagon planed in 2012 to blame Pakistan for “WMD proliferation, direct threat to the Homeland, terrorist organizations, and regional tensions with India.”

14. The plan also predicts the Cold War with China and a proxy military conflict using India’s military and the US SOF and proxies acting from Afghanistan. “It is unlikely that the U.S. will face China in armed conflict over the forecast period. However, China’s military strength and technological prowess will manifest beyond its borders in other ways that will significantly impact the U.S. Army. A mercantilist version of the Cold War is a potential outcome from China’s rise.”

15. China’s cooperation with North Korea, Sudan, Iran, Burma, Venezuela, and others contributes significantly to the proliferation of anti-access capabilities that “will threaten the ability of the U.S. Army to deploy and sustain in key regions of the world.” In human language, defense cooperation between countries “threatened” the US capability to attack and destroy those countries.

16. In 2012, the US didn’t see Germany and the EU among four most powerful, economies: the US, China, India and Japan. An indication that back in 2012, there were already plans to destroy the economies of the EU and Germany.

17. The US keeps undertaking steps “to minimize perceptions of American military “occupation”.”

18. In 2012 Pentagon also planned in relations to Russia to trigger a war between Russia and China: “Russia is also facing a general decline in military capabilities and is struggling to fund and implement a sweeping set of military reforms that would slash the size of ineffective reserve forces, stockpiles of antiquated equipment, a bloated officer corps, and military bureaucracy, while simultaneously transforming the armed forces into a professional force with modern weapons, doctrine, and enhanced readiness. Russian military doctrine is still focused on the core mission of a large Asian land war, with China.”

19. In 2012 Pentagon planned that post-2020, after Putin leaves by their estimates, NATO will be able to start an occupation of Russia. “Future deterioration in Russia’s security environment could eventually (post-2020) lead to increased dialogue and mil-mil relations with Russia, potentially leading to combined training or small-scale combined operations with Russian ground forces in the Arctic, the Caucasus, or Central Asia.” In the US terms “combined operations” is something only possible under the conditions of NATO invasion.

20. The true reason why the US funded NGO continue aiding to the migrant flow in Europe and why the US interfering with the energy security of the European countries: to create conditions for military intervention in Europe. “There are no likely scenarios requiring a U.S. limited intervention over the next decade. Later in the forecast period (2025-2030) there is a possibility that population declines and continuing financial weakness will seriously erode social and economic conditions in some European states, leading to widespread collapse in civil order, failure of national governments, or humanitarian crises due to natural disasters that weakened states are unable to contend with. “

21. IRREGULAR WARFARE in and against Russia “U.S. Army involvement in irregular warfare in the Europe/Russia region during the forecast period appears unlikely.” ” One exception that could arise late in the forecast period would involve a request by a weakened Russia for NATO assistance to stabilize key oil producing regions upon which Europe depends.” As of now, the US is conducting an irregular war against Ukraine for three years, and it will go on in perpetuity.


THE ADVANTAGE OF THE US 20 YEAR PLAN
One last thing stated in the 20-year plan is the CULTURAL PERCEPTION OF TIME. “Western cultures tend to have a view of time that is concrete and short-term, whereas Eastern cultures are more likely to focus on the long term and make decisions accordingly.”

“If the opponent sees time in terms of centuries, then the first has already lost. Unless the first party achieves total control through either annihilation or conquest and assimilation, its opponent will simply wait until the opportune time—be that ten, fifty, or two hundred years later—and then reassert itself.”


ACCORDING TO THIS PLAN BY 2018 WE SHOULD EXPECT:

Wars in Afghanistan, Syria, Yemen, and Iraq and Libya to continue as launch pads for the wars in Iran, China, Korean Peninsula, Pakistan, Azerbaijan, and Nigeria.

War on China has started using India as a proxy, and later by the US will interfere directly or via proxies in Afghanistan.

Ongoing collapse of the European economies with the US will act as a stabilizing military force against civil disobedience.

Russia’s economy will be weakened by the devastation of its trading partners in Europe, the Middle East and Asia.

The end of the doctrine of nation building means that the regions devastated by the US will be maintained in a state of devastation in perpetuity to promote collapse of neighboring countries.

In case you have forgotten what happened in Ukraine, this book should refresh your memory with the incredibly precise and humorous chronicles: ANTHOLOGY OF RUSSIAN HUMOR: FROM MAIDAN TO TRUMP


US SOURCE DOCUMENT
Operational Environments to 2028: The Strategic Environment for Unified Land Operations
2012 white paper that sets out empire's plans to invade &/or destroy countries up to 2028
http://www.arcic.army.mil/app_Documents/TRADOC_Paper_Operational-Environments-to-2028-Strategic-Environment-for-Unified-Land-Operations_AUG2012.pdf … 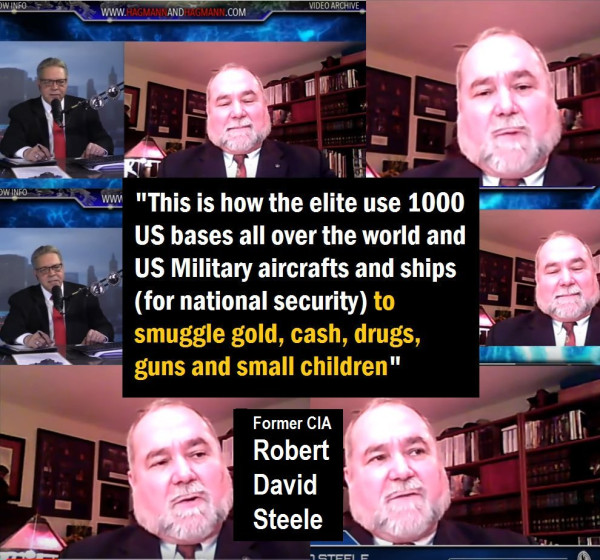