2015 started going the same way things had gone in 2013 and 2014. Tony Abbott was Prime Minister and Christine Milne was the leader of the Greens. Tony hated the Greens with a passion, and Christine Milne was opposed to doing deals with the LNP. The LNP government faced obvious problems in the Senate. On several issues Labor, Greens, and the Independents blocked key legislation. Their other problem was that the Coalition was led by Tony Abbott who, with Joe Hockey as treasurer, was virtually unelectable. Even people in the LNP could see that they could loose many seats if they kept going in the same way. 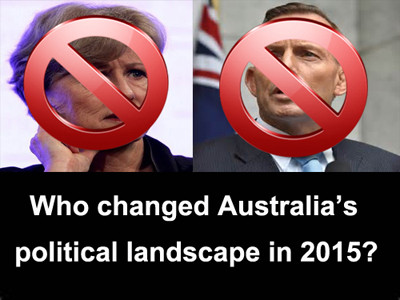 ARE THERE ACCIDENTS AND PURE LUCK IN POLITICS?
Suppose what happened in 2015 was not an accident. Suppose that someone came up with a truly brilliant plan to completely reverse the fortunes of the LNP in 2015.

To solve the first problem, something needed to be done to break the deadlocks in the Senate. What if the Greens replaced Christine Milne with someone much closer to LNP thinking like the virtrally unknown Senator Di Natale? He could “work with” the LNP to get their legislation passed by making a few symbolic changes. These could be passed off as “improvements” which the Greens could announce as having “forced” on the LNP. This would make the LNP appear “reasonable” but would still allow them to get their bills passed more or less intact.

To solve the second problem, they needed to replace Tony Abbott and Joe Hockey with people who could operate in a different way. Some subtlety and agility was needed to finesse a complete change in the political landscape. And who could be better than Malcolm Turnbull? He was apparently untainted and had widespread support in the LNP. He was known to be “soft” on climate change and was just the sort of person to work with Senator Di Natale. Joe Hockey had outlived his usefulness as well. His intransigence had pushed the austerity agenda as far as it could go, but something different was needed to get the LNP over the line in the next election.

What about that rather clever Scott Morrison? He could work out just the right changes to offer to Senator Di Natale. Yes we will need to give away a few things, but the austerity agenda will still move forward. Perhaps Malcolm and Scott could get the Greens to dust off their old plans for changes to Senate voting rules? Someone came to realize that by backing the Greens' changes the LNP could get rid of those damned independents and have an even better chance of getting a majority in both houses. With the support of the Greens and a new-look prime minister, the LNP might just win an unwinnable election.


AND THE REST IS HISTORY
Speculation aside, suddenly two quite unexpected leadership changes occurred. On 6 May a relatively unknown Green Senator named Richard Di Natale was announced as the Greens' new leader. Then, equally suddenly, Tony Abbott was rolled and replaced by his traditional rival, Malcolm Turnbull. The really interesting task for historians is to see whether these changes were just an accident or was there someone or small group who really knew how to play politics with the skill of a Russian chess master. And what country do they come from??

The Struggle Within – Leaks highlight major issues within The Greens
http://wixxyleaks.com/the-struggle-within-leaks-highlight-major-issues-within-the-greens/